The Cubs’ re-signing of Dexter Fowler to a one-year deal in late February surprised many, as the 29-year-old outfielder had reportedly agreed to a three-year pact with the Orioles earlier the same week. With the O’s, Fowler would have likely been slotted into right field, considering the presence of multiple Gold Glove winner Adam Jones in center. With the Cubs, however, it seems likely that Fowler will return to his former role as the club’s primary center fielder. This largely put to rest the speculation about moving newly acquired Cubs outfielder Jason Heyward from his natural position in right, but the Cubs shouldn’t be so quick to abandon that thought. While Fowler has logged many more innings as a center fielder than Heyward, I believe that the optimal strategy will, in fact, be to play Heyward in center and Fowler in right.

Over their careers, both Fowler and Heyward have logged time at each position, although Heyward has had considerably more time in center than Fowler has had in right. In addition to a handful of postseason starts at center with the Braves and Cardinals, Heyward’s 370 regular season innings at the position dwarfs Fowler’s five right field innings. This alone is evidence of Heyward’s outfield abilities, but what about Fowler? Scouting reports praised Fowler’s prodigious defensive abilities in centerfield as a Rockies prospect. Baseball America even crowned him as the “Best Defensive OF” in the 2007 and 2008 California and Texas leagues, respectively. That reputation followed him into the majors, where he was popularly regarded as a plus center fielder. In Heyward’s case, some have suggested that he literally outgrew center field after high school, though Fowler is just as tall at 6’5″. But with a nearly 50-pound advantage on his teammate, perhaps it was his weight that forced him into the corner. 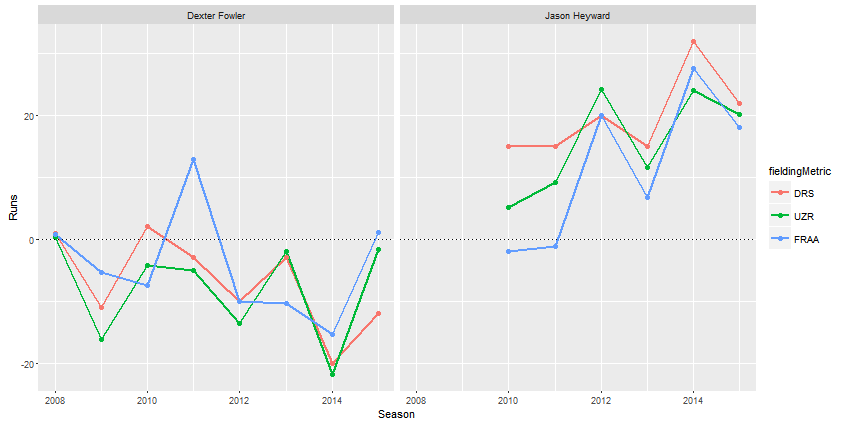 The three most commonly used advanced fielding metrics generally agree about each player’s defensive value. The chart above shows the yearly trajectory of Fowler’s center field and Heyward’s right field defensive performance as measured by DRS (Defensive Runs Saved), UZR (Ultimate Zone Rating) and FRAA (Fielding Runs Above Average). The methodologies behind each metric differ, but what they have in common is that they measure the positive or negative run value each player contributes with his defense, with league average at the position set at zero.

DRS and UZR both use zone-based fielding data to grade defense, comparing plays made against other fielders at the same position. DRS is essentially a more refined UZR, accounting for batted ball velocity and vector in evaluating fielder range. In addition, outfielder arm strength and control of the running game is factored in. FRAA, created by Baseball Prospectus, is the simplest of the three metrics. Using play-by-play data, fielders are graded based on plays made compared to the average number of plays made by other players at that position, and adjustments are made for batter handedness, park factors, and base-out states.

Other than an exceptional FRAA season in 2011 with Colorado, Fowler has generally been a below average center fielder. His defensive value cratered in 2014, when he cost the Astros about 19 runs with his defense – using the rule of thumb of ten runs to a win, that’s nearly two wins lost on his poor defense! On the other hand, Heyward’s exceptional glove in right field has been one of the best in game over the past few seasons, saving an average 20 runs every year since 2012. 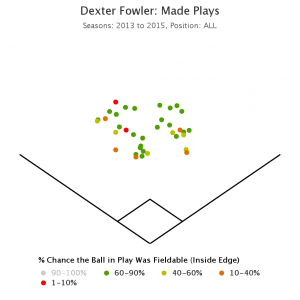 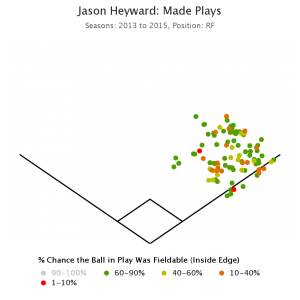 To better visualize this, we can look to the above spray charts that depict plays made by each outfielder at their respective positions from 2013 through last season. Each play is graded by Inside Edge by the percentage chance that the ball in play could be fielded. With routine plays (90-100%) de-selected, it is immediately evident how many more non-routine balls that Heyward was able to make plays on. This is certainly an imperfect way to visualize each fielder’s performance, but seeing the amount of difficult plays that Heyward has been able to make certainly confirms his lofty fielding metrics.

While the differences between the two outfielders are stark, the fact that they play different positions makes it tricky to compare how they would fare if they switched places for a whole season. For Heyward, we can look to his 233 big league innings at center field to see how he might fare. Between the three defensive metrics, he graded as slightly above average. But, that was in a limited sample of just 233 innings. How could his performance be approximated across a whole season?

In a piece for The Hardball Times last year, Jeff Zimmerman found that there was a 9.4 run difference in UZR per 162 games among defenders going from center to right field.  For Fowler, that means a 9.4 run boost in his defense when changing to the easier positon. Factoring in the past three seasons of defensive performance by all three metrics, Fowler projects to be a negative-9 run defender as a center fielder next year. Moving him to right and factoring in the 9.4 run positional adjustment would mean that he would just break even defensively, which is about a one-win defensive improvement. If you decrease Heyward’s value by the same amount, he would grade as 10 run center fielder, about half of his current value as a right fielder. This would be very good as is, and if his value doesn’t drop by quite that much, he would be an incredibly valuable centerfielder. It should be noted that this concept of positional translation should not be taken literally, considering that there could be extreme variance when looking at specific cases, but the general idea holds true.

Thinking about Heyward as a full time center fielder isn’t a new idea. Many writers have previously pointed out how valuable he would be at the more difficult position, especially when one factors in his offensive value. The potential value of Fowler in right, on the other hand, has seldom been mentioned. The defensive metrics agree that Fowler has been detrimental to his team up the middle. If slotted into the corner, though, some of those defensive misgivings could be neutralized. In the tight and competitive NL Central, taking advantage of every defensive positional edge could be the difference between locking up a playoff spot and being left out in the cold.

1 comment on “The Case for Heyward Over Fowler in Center”

I just tagged Maddon with a link to this on Twatter, no harm in trying.