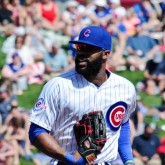 The Cubs’ re-signing of Dexter Fowler to a one-year deal in late February surprised many, as the 29-year-old outfielder had reportedly agreed to a three-year pact with the Orioles earlier the same week. With the O’s, Fowler would have likely been slotted into right field, considering the presence of multiple Gold Glove winner Adam Jones in […]

In the fourth game of the 2015 National League Championship Series, down 3-0 in the series, the Cubs had their backs against the wall. And in the top of the first inning, Lucas Duda set the tenor of the game when he drilled a three-run shot into center field on a full count offering from starter Jason […]