I’ve never known a child who didn’t have dreams. Whether it’s wanting play baseball professionally, wanting to be a princess, or perhaps wanting to be a garbage collector (as my nephew currently aspires to be), there seems to be no limit to what you believe you can achieve when you’re five years old. The requisite skill, royal lineage, or continuance of future desire doesn’t generally factor into the equation until much later. The absence of objective thought is part of what makes it beautiful.

This is why it is so fascinating to me when I meet someone who appears to be living out their childhood dreams in an acutely specific manner. Unbeknownst to me before my interview with him last weekend, the Cubs’ recent signing of Brian Matusz (MAT-iss) did just that. Upon being asked what intrigued him about the specific opportunity with the Cubs, he didn’t hold back:

“… I actually grew up a Cubs fan in Arizona, and before we had the Diamondbacks, I was coming home from school and watching the Cubs on WGN… my Dad is from Indiana, so he’s a Cubs fan. My brother and I, we’d always watch the Cubs when it was Ryne Sandberg, Mark Grace and [Sammy] Sosa…e ven being in Arizona (extended spring training), putting on the Cubs jersey, the Cubs hat, tying on the blue cleats, it is cool, a good feeling.”

It may seem a bit silly to think of a professional baseball player taking a tour of a stadium, or reveling so thoroughly in the dreams of his childhood. But perhaps Wrigley Field holds an aura that makes it an exception, as none of that seemed to matter to Matusz as he recalled his first trip to The Friendly Confines:

“(My) first time being at Wrigley was two years ago. When the Orioles went in there, it was the coolest experience ever, I pitched two out of the three games there, and it was just unbelievable. I took a tour of the entire stadium, went in the scoreboard in center field, and did the whole deal, so that was pretty cool.”

However, there isn’t any escaping that baseball is a business, so even for a guy like Matusz, the opportunities that a specific organization can offer him will always trump nostalgia. We discussed what drew him to the Cubs’ organization, and whether they had given him any direction on whether his future may be as a starting pitcher or as a reliever:

“It’s either one of the two. I think being able to stretch out as a starter is [important], you could always fall back to bullpen if necessary, you can’t work as a bullpen guy and then start … so I think that’s the thing right now … just an opportunity to build up myself as a starter now, and then have a potential to either be a starter or reliever—just to have that option—and to be wanted by an organization, to be able to be with people who want me over here, it’s a good feeling … whatever best helps the team, to be honest. I really enjoy doing both, I enjoyed starting, early in my career, and really enjoyed being in the bullpen the last couple of years, so for me, whatever best helps the team.”

Matusz has slowly stopped using his two-seam fastball over the past few years, and I noticed that it appeared to be completely absent from his arsenal this season. This coincides with an uptick in his slider and change-up use, though surprisingly his four-seam usage stayed relatively steady.

We discussed whether this was command related, and whether he felt he could set up his offspeed stuff more effectively with the four-seam as opposed to his sinker. He had some clarifications. “It wasn’t technically a sinker, like a Zach Britton sinker,” he said, “or anything like that. But it was more of a two-seamer. For me it’s just about locating, and with the four-seam fastball, I just have better command.” 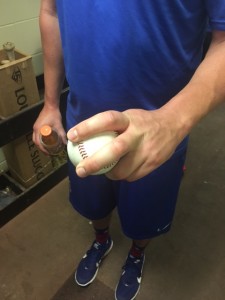 He has traditionally relied on his changeup heavily against righties (31 percent usage), and his slider against lefties (42 percent). I asked whether he still delineated between his slider and curve, especially considering his diminishing use of the curve in recent years. He confirmed that he does still throw two distinctly separate breaking pitches, and was kind enough to show me the difference in the way he grips them: 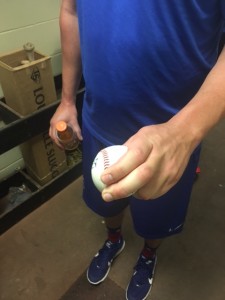 His slider differs in grip from his four-seam simply by dropping his index finger down toward the laces to meet his middle finger, making the two pitches appear similar out of the hand. This is a starkly different look than his curve, which he grips in a completely different area of the ball:

Matusz’s curve is a pitch he rarely uses, but it does have enough of a separation in velocity between both the slider and change to have a very distinct look, so you can expect to continue to pull it out occasionally when he feels he needs to attack hitters differently:

The recent additions of Mike Montgomery and Aroldis Chapman have made Matusz’s role with the big league bullpen murky, but keep in mind the departure of Adam Warren could open up an opportunity for a spot start should an injury occur, or Joe Madden decides one of his starters needs a bit of extra rest down the stretch. If it does happen, perhaps take a moment to reflect upon the joy of a young man living out his childhood dream, one pitch at a time.

1 comment on “Brian Matusz: Living Out A Childhood Dream”

Great young man. Brian was a former student/athlete of mine back in his High School days at St. Mary’s H.S. Brian was a member of my Lettermen’s Club & has always been involved with various community projects. He will be an outstanding addition to the community & the entire Cubs Organization! Great High Character Individual & Great talent! Great things happen for a reason! Could this be the Cubs year? I sincerely hope so! Congratulations Brian!