Consistency can be mundane. Among a plethora of new and exciting things to talk about on the North Side these days, all with their own idiosyncrasies, and all shedding new light on this ever-changing club, consistency often takes a back seat.

Anthony Rizzo is the perfect example of that. His elite plate approach, packed with patience as well as power, isn’t something Cubs fans talk about very often. It’s not simply because they take it for granted, it’s because well, there’s a lot of things to talk about when it comes to the 2016 Cubs. With a landscape of talent that’s often changing, whether it be by revamping the bullpen minor league style, big name additions via trade to kick off deadline week, or a new crop of new, fresh and exciting prospects being called up — there’s always a new topic to focus on.

But let’s stop for a second and focus on one of the most important pillars of the Cubs’ success in recent years, and how he may not be that model of consistency in the way that everyone deems him to be. That’s right, Rizzo hasn’t been consistent, and especially not this year. Rizzo is improving, and drastically. He’s refining all aspects of his game to put himself not just among the best hitters on the North Side, but in all of baseball.

Take a look at where Rizzo ranks among NL hitters (min. 400 PA) in all of these categories:

He’s ranking top ten in all but batting average. That should be considered baseball elite. Rizzo has progressed over his career into an exceptional baseball player in all aspects; power, on-base skills, and last season Rizzo even improved his running game by posting a career high 17 stolen bases. Last year, Rizzo more than tripled his stolen base totals from 2014, a season in which he only stole five bases.

How could a player like this get any better? There is always room for improvement and fine tuning. Baseball is a game of adjustments, and to succeed, you must move with the ebb and flow of those adjustments by simply adjusting right back.

Rizzo has done just that. Plate approach has been a key aspect of the Cubs sucess this season, a facet of his talent that Rizzo works extremely hard to foster. While the team is posting the best walk rate in baseball coupled with the best on-base percentage in the National League, Rizzo’s approach fit right in—no real adjustments needed. But Rizzo is helping improve his offensive talents by taking his already exceptional plate approach to another level this season, posting a career-best walk rate and the second lowest walk rate on the team, as well as a strikeout rate that is only rivaled by the notorious Ben Zobrist—a hitter whose brand is built upon his propensity to never strikeout.

To delve further into just how much Rizzo has improved at the plate, let’s take a look at his plate discpline numbers from 2014 to 2015.

In 2015, what these numbers boil down to is Rizzo is simply swinging less overall. He’s swinging less at pitches outside the zone and making contact on less, which is helping contribute to his spike in walk rate, while his overall swing rate is down nearly three percentage points. The interesting fact here is that Rizzo’s contact rate from year to year has gone down just one percentage point, indicating that his eye at the plate is improving and he’s picking his pitches with extreme care—something that’s strongly reflected in his impressive power numbers.

One of the main contributing factors to Rizzo’s recent power surge is not simply that he’s waiting for the right pitch to hit, but that he’s working with the pitches he’s seeing and covering more of the plate than he did last season. Take a look at the progression between Rizzo’s isolated power maps from 2015 to 2016: 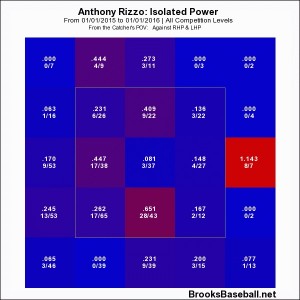 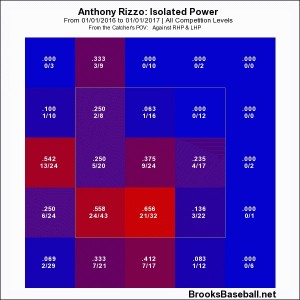 He’s hitting low and away pitches with much more authority than he had before, an area of the plate that has become a sweet spot for the first baseman in 2016. Of course, whenever a change is made by a batter that shows drastic results such as this, the common sentiment is “the league will adjust back.” But Rizzo’s keen skill at the plate leaves no wiggle room for pitchers. If he doesn’t like the pitches he’s seeing, he’ll simply foul them off, take them for balls, or—as we’ve seen in the improvement in plate coverage in 2016—find a way to make quality contact on them.

Rizzo has silently been improving amongst the loud bang that is the 2016 Cubs. But that’s often times what a foundation is, something that aids in setting the basis for that which is larger to be built upon. As the clubs most tenured hitter, Rizzo serves not only as the poster-child of the Cubs offensive brand that is only getting better with time, but he is also a leader and example to the youth movement happening in Chicago. Rizzo has simply become part of the brand of North Side baseball in Chicago, be it as the lovable pal to newcomer Kris Bryant, the leader who has seen this club rise through its rebuild, the symbol and compassionate voice of perseverance through personal struggles, or from a starkly baseball contrast, one of the now best players in the game. Rizzo may not always be in the spotlight, but he certainly still shines.

Tags: Adjustments, Anthony Rizzo, Elite |
Cat Garcia
Follow @TheBaseballGirl
Cat Garcia is a freelance baseball writer from Chicago. When she is not writing or reading about baseball, she can be found at her place of employment, located at 1060 W. Addison Street.
read more from Cat Garcia

2 comments on “In The Background, Rizzo Continues to Improve”

Er, what about his gentle ribbing of previous teammates? (GR+) That has to be off the charts.

Great write up! I’m not sure why this site doesn’t get more comments

What do you think about the defensive abilities of Rizzo? The eye test seems to say gold glove, but I’m not proficient with defensive stats.