Kyle Hendricks was never supposed to be this good. But, after making a few adjustments and in a few years, Hendricks went from a back of the rotation starter to a legitimate Cy Young candidate. Mike Petriello even included him on his Top 10 starting pitchers for 2017—omitting Jon Lester and Jake Arrieta.

In some ways it’s hard to account for the right-hander’s success. His fastball barely touches 90 mph, and his breaking balls aren’t exactly electric. At first glance, he looks like a pitcher who is doomed for regression. His FIP in 2016 was a full run higher than his ERA, 3.24 and 2.13 respectively. His BABIP of .250 was twenty points lower than his career average of .273, benefitting from a historically good Cubs defense. Kyle Hendricks may very well regress toward his relatively-high-but-still-very-good FIP, and maybe it’s more likely that he will, but that doesn’t mean that he must.

The Cubs defense that Hendricks benefitted from in 2016 will be largely the same in 2017. Ben Zobrist will be a year older, but Javier Baez should get more playing time. Kyle Schwarber has to play somewhere, but the platoon of Albert Almora and Jon Jay should be a slight improvement over Dexter Fowler. Because of this, Hendricks might get to enjoy another year of outperforming his FIP with a lower BABIP—in which case, we’ll know to give the defense its fair share of the credit for Hendricks’ success.

Hendricks, though, has helped his defense by inducing more soft contact. It’s the perfect symbiotic relationship. From Fangraphs, his soft-hit contact rose from 18% to 25%. His hard-hit rate stayed the same which might account for the consistency in his HR/9 and thus his higher FIP. And according to Baseball Savant, Hendricks kept his average exit velocity below the league average for much of the year. He was tied for seventh among pitchers with at least 300 batted ball events with an Avg/EV of 87.2.

This sounds impressive; Jake Arrieta also had an 87.2 Avg/EV. Kenta Maeda and Corey Kluber were also Statcast stars, at least when considering Avg/EV with 86.0 and 87.0 respectively. That’s good company to keep, but guess who ranked #1. Clayton Kershaw? Max Scherzer? Noah Syndergaard? Nope. It was Tyler Anderson who *googles Tyler Anderson* had a pretty good year considering he pitched in Colorado, and he’s a randomly generated player from MLB The Show. Right behind him was CC Sabathia who had a cFIP of 98.

For Fangraphs, Craig Edwards has researched the relationship between FIP and exit velocity and found there isn’t a strong correlation between the two. Here’s the top ten pitchers by their Avg/EV for 2016 with their cFIP, DRA, and WARP:

It’s a small sample, but it appears to corroborate Edwards’ findings. If there was a correlation between Avg/EV and a pitcher’s ability to prevent runs, we would see more elite starters in this list. Instead, we see an even mix of league average starters rubbing elbows with Kershaw, Kluber, and Hendricks.

But there still might be useful information to extrapolate from the Statcast data. Hendricks, for example, has dramatically improved his performance against left-handers. In 2015, lefties hit .264/.325/.472 against Hendricks; in 2016, lefties hit .217/.277/.339. Part of this is because Hendricks changed his approach against lefties. In 2015, Hendricks threw his fastballs to one part of the plate when facing lefties. Down and away. In 2016 though, Hendricks found new confidence in his four-seamer and started throwing it in on the hands of left handed hitters. From Baseball Savant: 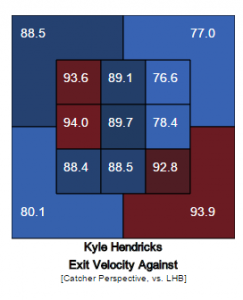 And from Brooks Baseball: 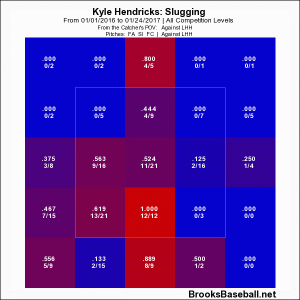 Pitches up and in against lefties induced both soft-contact and low slugging, while fastballs down and away got hit hard. Hendricks induced almost no whiffs on hard pitches up and in, so most were put in play. This partially accounts for the discrepancy between his ERA and his FIP. Less whiffs results in more balls put in play, which don’t account for FIP, but these balls in play are leaving the bat at a relative snail’s pace. Some might drop in for a hit, but Hendricks can feel assured that none of these are leaving the park or going into the gap. Hendricks moved his hard pitches away from a part of the plate that was hurting him and into a part where, so far, he’s thrived.

Hendricks made an adjustment, but what’s keeping the rest of league to adjusting to his adjustment? Every team now is filled with savvy baseball minds. Surely, they’ve picked up on the fact that Hendricks will only throw fastballs on the inner part of the plate to left-handers while keeping his offspeed pitches away. The answer may lie in tunneling.

If you haven’t read the work done over at the Baseball Prospectus main site about pitching tunnels, do that now. Hendricks has often been compared to Greg Maddux, which used to seem ridiculous. How could a guy who was never supposed to be anything more than a back of the rotation starter be compared to one of the greatest pitchers in the history of baseball? Turns out, the comparison makes a lot of sense:

“Hendricks has a repertoire that might remind you of Maddux. It turns out that his approach is Maddux-like as well. Hendricks ranks 15th in baseball (among pitchers throwing 1,000 pitch pairs) in terms of having the smallest pitch differential at the batter’s decision making point—this is based on Hendricks’ Tunnel Differential, which measures the distance between back-to-back pitches 23.8 feet from the front of home plate. During those final 24 feet or so, Hendricks’ pitches move an additional three inches—that’s three inches of movement after the batter has decided if they’re swinging, and where they’re swinging.”

Left-handed hitters weren’t able to adjust to Hendricks’ somewhat predictable location—hard stuff in, soft stuff away—because his pitches all look the same. Not only that, but even if a hitter knew a fastball was coming, he wouldn’t know which fastball. In 2016, Hendricks threw his four-seamer more than ever before. Consider those extra three inches a pitch moves from the decision point to the plate, and it’s easier to understand why Hendricks should be able to induce soft contact and beat his FIP again in 2017.