It’s funny to describe a player who amassed 3.86 wins above replacement last year as a breakout candidate. Baseball is chock full of good players who contributed that much to their teams’ success. For instance, David Ortiz (3.88) and Dexter Fowler (3.62).

And yet, many observers, including a majority of the BP Wrigleycast crew, have pegged Addison Russell as a “breakout player” for 2017.

Russell was very good in 2016, but even a casual glance at his offensive and defensive metrics show that his other-worldly defense covered up what was arguably a below-average offensive season. That, in a nutshell, is what makes Russell a breakout candidate in 2017. If he takes additional strides on offense in 2017, he would likely become one of the ten most valuable players in the game. And what Russell has shown thus far in spring training should have Cubs fans feeling downright giddy to the extent three spring training games can produce such a feeling and they probably shouldn’t so just stop.

Back to Russell’s potential. I think PECOTA understates it, as the 90th percentile projection is not a far cry from his 2016 performance:

Moreover, his performance in 2015 and 2016 suggests that he’s capable of making adjustments and drastic improvements from year to year. As compared to 2015, he improved dramatically in 2016 on offense in numerous categories:

I attribute Russell’s improved performance across the board to experience, maturation, and becoming more familiar with MLB pitching. At the same time, I attribute Russell’s significant power surge to him focusing on pulling the ball to left field. Indeed, he yanked every single one of his 2016 regular season home runs to left field, a fair departure from his home run spray chart in 2015: 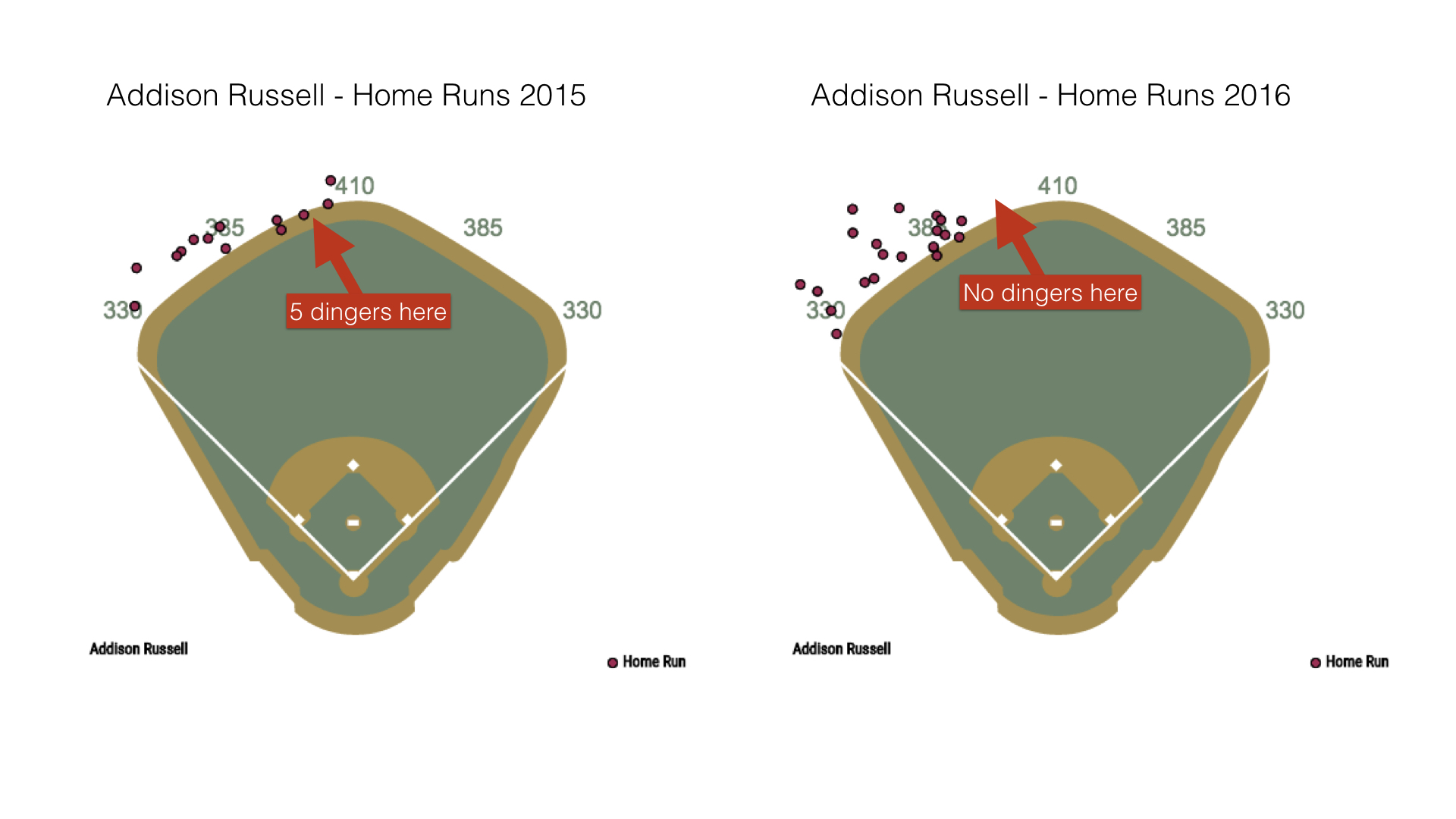 Russell’s performance was fairly consistent throughout the 2016 season, but in August and September, Russell starting putting a lot more balls in play. His walk rate dropped to 7 percent and his strikeout rate moved to 19.5 percent, both of which foreshadowed troubles ahead, but were largely ignored because Russell enjoyed the best power-hitting period of his career, with nine home runs in the final two months of the season.

The troubling indicators would rear their ugly head in the playoffs, as Russell’s walk rate dropped to 2.9 percent while his strikeout rate dropped a tad to 19.1 percent. As many Cubs fans recall, all the additional contact did not add up to better results. He hit a lot of soft ground balls and lazy fly balls. His BABIP for the entire 2016 playoff run was a dismal .204, and he failed to hit a home run through the first eight games.

Looking at his zone profile and spray chart from early in the playoffs, Russell swung at a lot of low, outside pitches and tried to pull them, resulting in weak ground balls to the left side of the infield. Note the hot-hot-hot pink “Ground Balls” – both the location of the pitches and where Russell hit them in the field of play: 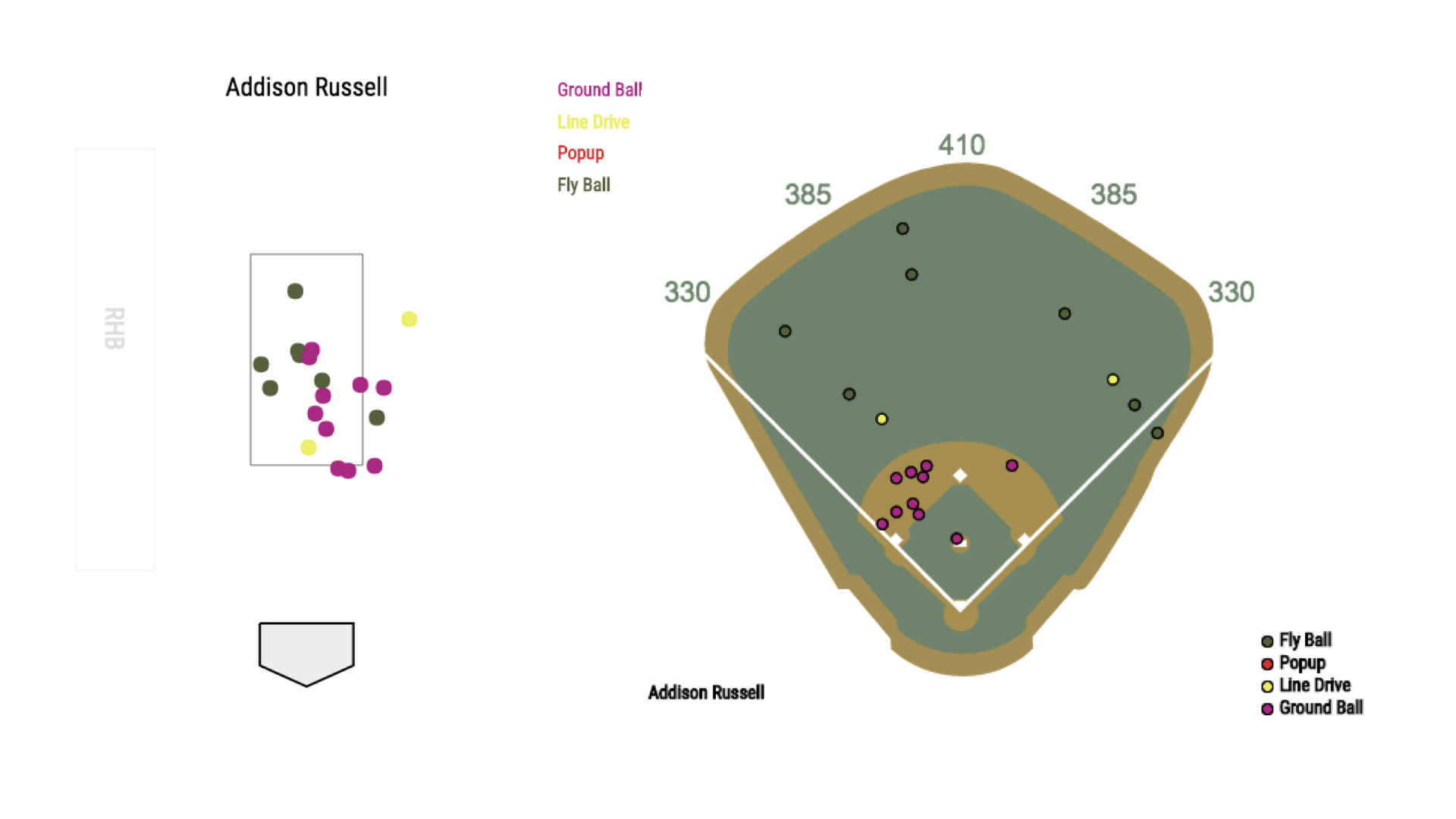 After Game Three of the NLCS, however, Russell clearly made another adjustment, and through the rest of the playoffs, he hit the ball with much more authority. What did he do differently? My guess: he stopped trying to pull everything to left field. Maybe someone told him he does not have to rely on pulling the ball to generate power . . . because he doesn’t.

Here are the same charts as above for balls Russell hit into play after NLCS Game Three. In particular, note the lime green “Line Drives” – both the location of the pitches and where Russell hit them in the field of play: 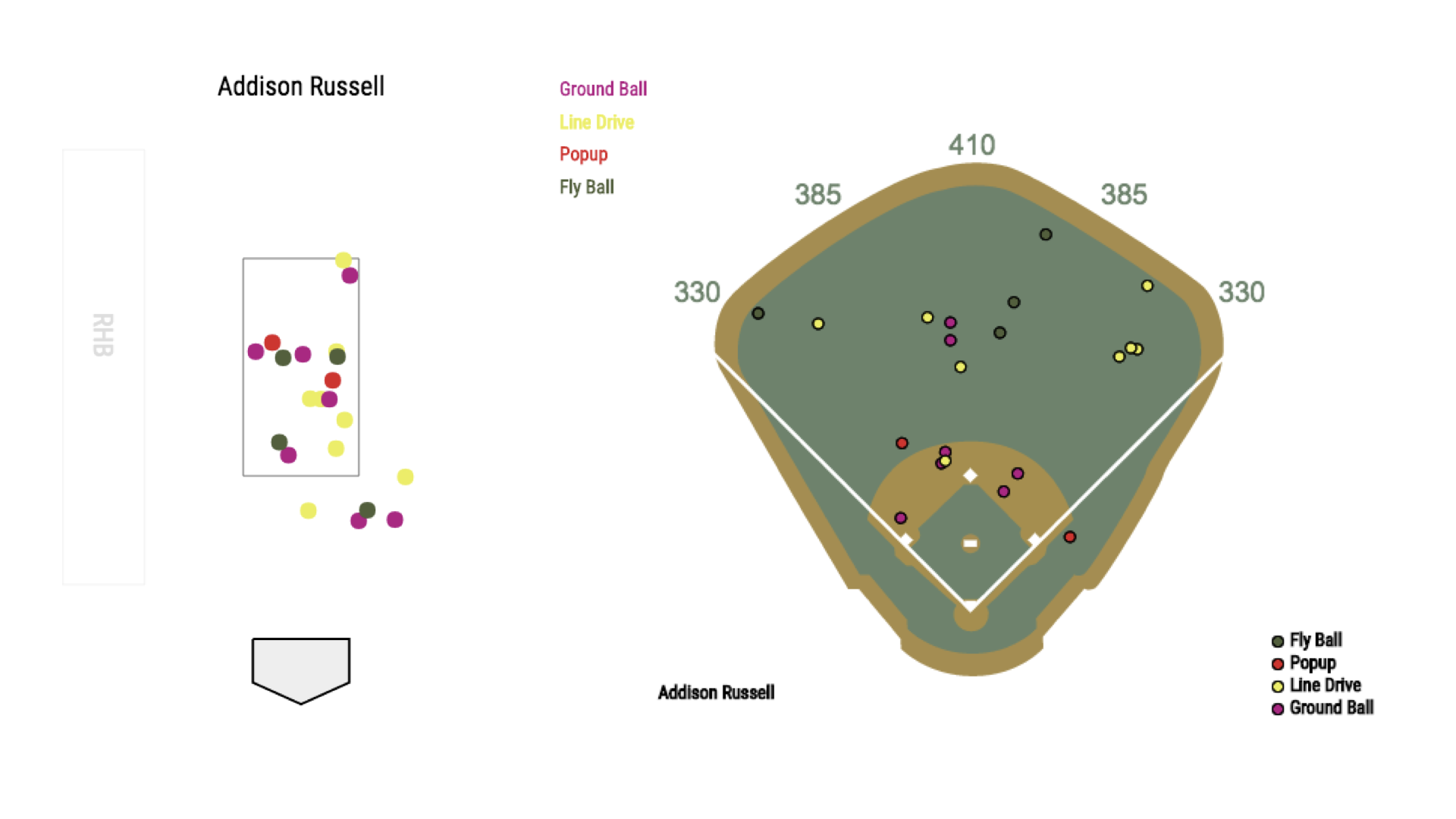 That chart makes clear that Russell stopped trying to pull pitches in the low, outside part of the zone, instead hitting them to center and right field, many of them resulting in line drives. The spray chart of his playoff home runs, all of which came after he made this fateful adjustment, is also revealing: 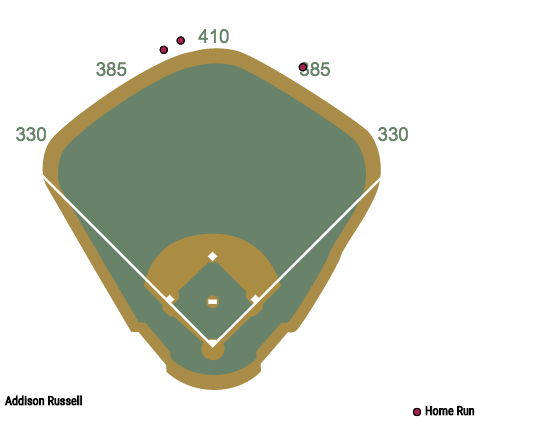 This spring training, as I alluded to above, Russell is off to a promising start with two home runs in his first seven at-bats. In the second one, a three-run shot, Russell’s approach is a thing of beauty:

Russell does not try to yank this pitch out to left. He stays up the middle and crushes it to center, knowing that he does not need to pull the ball to generate power. And for good measure, his other hit this spring is a single he smoked up the middle. The Cubs should like everything about that. If he can maintain this up the middle approach, along with his improving walk rate and dropping strikeout rate, he may yet surpass the 90th+ percentile performance in his PECOTA projections. And that, combined with his stellar defense, looks like an MVP-caliber season.

Tags: Addison Russell, Breakout candidates |
Dan Hodgman
Follow @@daniel_hodgman
I live in Lincoln Park with my wife, who thinks I am crazy because I can sit and watch every pitch of the Cubs season without going insane, and my 160-lb mastiff, who just wants to sleep, eat, and poop. I write about baseball in the hopes of one day changing both of their perspectives.
read more from Dan Hodgman

Great piece. Totally agree on getting back to using the whole field; true for about every player, notably Baez and Castro in recent years for Cubs, as well as Russell.

Forgetting high-minded sabermetrics for the moment, I believe Russell is about to eclipse in Yr 3 what Sandberg did in his Yr 3. Ditto in comparing Jeter and Larkin as well. I base it on a few things, but basically Russell is already a better OPSer, one yr younger, than all 3. His minors’ OPS beat all 3 as well, so no fluke here. Finally, for the long haul, when we consider he’s already a better fielder than all 3, it is not enough to say he’s a future All-Star–he’s already that–but Cooperstown is very much on his GPS.