For decades, baseball has been known as America’s Game, and many young fans have been raised reciting the 1975 Chevrolet commercial that placed baseball in the American pantheon with apple pie and hot dogs. In 1889, concerning this connection, Walt Whitman wrote, “it’s our game: that’s the chief fact in connection with it: America’s game: has the snap, go, fling, of the American atmosphere—belongs as much to our institutions, fits into them as significantly, as our constitutions, laws: is just as important in the sum total of our historic life.”1 This articulation has been the subject of many columns and conversations by baseball fans and historians, but even it does not fully do justice to the relationship between the country and baseball.

America was founded, perhaps equally, on bloodshed and intellectualism. In 1787, recognizing that the same general spirit of freedom and self-rule that inspired America’s victory over Great Britain would tear apart the fragile strings holding together the 13 states, 55 delegates gathered in Philadelphia to discuss the matter. The resulting Constitution created a wholly unique system of government meant to protect and perpetuate the liberties fought for in the American Revolution. From that point onward, American history tells the tale of a balancing act between war—national security—and civil liberties that created the notion of American exceptionalism. 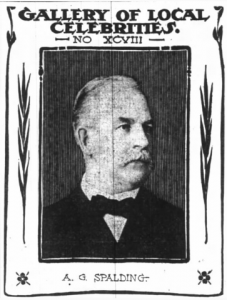 Albert Goodwill Spalding, born September 2nd, 1849 in Byron, Illinois, served as a player, manager, and executive in baseball before starting a sporting goods company. He won 47 games in 1876 for the Chicago White Stockings and holds the record for highest win percentage at .796. He was the first player to use a glove full-time and the first owner to hold spring training, taking the White Stockings to Hot Springs, Arkansas, in 1886.2 For his stellar baseball career and dedication to the game, the Veterans Committee inducted him into the Hall of Fame in 1939. But his most important contribution to the sport was asserting it as America’s game.

In his 1911 book, “America’s National Game: Historic Facts Concerning the Beginning, Evolution, Development and popularity of Base Ball,” Spalding asserted the case for baseball as America’s game. He wrote, “To enter upon a deliberate argument to prove that Base Ball is our National Game; that it has all the attributes of American origin, American character and unbounded public favor in America seems a work of supererogation. It is to undertake the elucidation of a patent fact; the sober demonstration of an axiom; it is like a solemn declaration that two plus two equal four.”3 Baseball as America’s sport is something so common sense it is impossible to think otherwise.

Spalding used his book as a means of further cementing the uniquely American qualities of baseball. He gave a history of stick and ball sports throughout the world, concluding Base Ball differs from them all because it embodies “the exponent of American Courage, Confidence, Combativeness; American Dash, Discipline, Determination; American Energy, Eagerness, Enthusiasm; American Pluck, Persistency, Performance; American Spirit, Sagacity, Success; American Vim, Vigor, Virility.” (4) But more essentially, it “is the American game par excellence because its playing demands Brain and Brawn, and American manhood supplies these ingredients in quantity sufficient to spread over the entire continent.”4 It conditions Americans to be able to conquer any profession they enter and to contribute meaningfully to society, a quality upon which democratic republics rely.

Indeed, Spalding believed baseball to be fundamentally suited to the American regime: “the genius of our institutions is Democratic; Base Ball is a democratic game. The spirit of our national life is combative; Base Ball is a combative game. We are a cosmopolitan people, knowing no arbitrary class distinctions, acknowledging none.”5 Baseball embodies every aspect of the American life, becoming as inclusionary as people saw America itself to be.

Elucidating on the combative element of the sport and country, Spalding wrote: “Base Ball, I repeat, is war! And the playing of the game is a battle in which every contestant is a commanding General, who, having a field of occupation, must defend it; who, having gained an advantage, must hold it by the employment of every faculty of his brain and body, by every resource of his mind and muscle.”6 Again, Spalding stressed the mind-body connection necessary for baseball and linked it to the creation of America on the battlefield.

Not lost on Spalding was the democratic republican element of America, the America forged during the Constitutional Convention. Concerning this, Spalding posited that baseball is the one sport in which fans have an actual impact on the outcome of the games. Though he did not mention the particulars of the impact fans have on the game, he stressed that the passion they bring to the field—personified by the fights that would break out in the bleachers—finds its way to the players, who presumably feed on it. Like those who participate in town halls and elections, the fans make their voices heard.

And in ballparks, every voice is heard. It offers a place for every American: “Time was, and not long ago, when comparatively few understood the playing rules; but the day has come when nearly every man and boy in the land is versed in all intricacies of the pastime; thousands of young women have learned it well enough to keep score, and the number of matrons who know the difference between the short-stop and the back-stop is daily increasing.”7 Baseball, then, can also guide American politics and dictate the future of the country, a future that increasingly recognized the distinct American struggle for liberty and 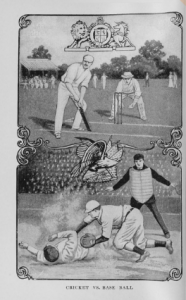 Here, he related baseball to English cricket, arguing neither could work in the other country. England is too aristocratic to implement baseball; it requires a “genteel game, a conventional game” like cricket.8 Englishmen are suited to wait days for the conclusion of the game, while Americans are so brash they need results after mere hours of play. An Englishman can “engage in the national pastime without soiling his linen or neglecting his lady,” but an American becomes wholly devoted to the game once he starts playing it.9 There is a fundamental difference in temperament born from each regime that both informs and is shaped by the national sport. Spalding further separated America from England, demonstrating the incompatibility of the two.

“First-that baseball had its origin in the United States;
Second–that the first scheme for playing it, according to the best evidence obtainable to date, was devised by Abner Doubleday, at Cooperstown, New York, in 1839.”10
The evidence consisted almost entirely in testimony from Doubleday’s schoolmate Abner Graves, who recalled Doubleday overtaking a game of marbles to draw a diamond in the dirt and create baseball.
Mills had been a longtime friend of Doubleday, having met him during the Civil War, in which they were both Generals. Spalding had first become aware of Doubleday via an 1893 obituary of Doubleday printed in the Theosophical Society’s journal, of which Spalding was a member. Then, in 1905, the obituary was re-printed with a final line crediting him with naming base ball and “in large degree its development from a simpler sport; or indeed…it’s very invention.”11

Spalding and the Commission were eager to name Doubleday the inventor because of how distinctly American he was. After making note of the origins of baseball, Spalding included a biography 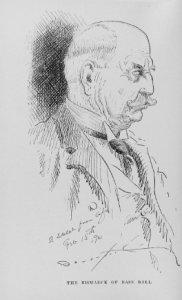 of Doubleday that recounted his military accomplishments in the Civil War. He quickly rose up the ranks, becoming a general before he was “sent to Gettysburg…and took command of the field till the arrival of General Howard…and on the third day aided in the repulse of Pickett’s charge.”12 Spalding boasted, “the founder of our National Game became a Major General in the United States Army!” Doubleday went on to become a lawyer and Civil War historian, as well as a prominent member of the Theosophical Society.

But moreover, the connection between Doubleday and baseball signifies the relationship between war and peace and the sport. Referring to the spread of baseball during the Civil War, Spalding contented, “the sport had its baptism when our country was in the preliminary agonies of a fratricidal conflict. . . . It was the medium by which, in the days following the ‘late unpleasantness,’ a million warriors and their sons, from both belligerent sections, passed naturally, easily, gracefully, from a state of bitter battling to one of perfect peace.”13 Baseball could act as the balance between the two Americas, the one impassioned by the Revolution and the other gathered around the table in Philadelphia.

The Doubleday myth spread quickly around the country and was immediately championed by writers and fans alike. The Chicago Inter Ocean declared, “let the joyous tidings that baseball was founded in America…be spread abroad, and let every fan rejoice.”14 The Wichita Daily Eagle echoed that sentiment and added that the origin “was, in a way, connected with politics,” placing Doubleday’s invention of the game at a Harrison presidential campaign event.15 All publications stressed Doubleday’s connection to the Civil War, declaring his most honorable qualities his invention of baseball and his dedication to America. In this way, he helped shape the country twice over.

It is evident that Spalding tried to make baseball into America’s Game, and it is also apparent that he was at least partially successful. Although the Doubleday myth got debunked fairly quickly, that it has nonetheless remained part of baseball lore gives credence to Spalding’s efforts. As baseball has grown and lent its stars to various wars, receiving them back as even larger heroes, it has cemented itself in American culture. It has reflected and influenced American history so monumentally that it has become America.

Tags: Baseball history, Spalding |
Mary Craig
Follow @marymcraig
Mary is a political science grad student who finds herself in Texas after detours in Canada and Massachusetts. She is a lover of sports, baked goods, semi-colons, and Times New Roman font.
read more from Mary Craig

Mr. Spalding sure loved his alliterations! What a hoot!

Thanks for a tasty bit of historical baseball scholarship. Reading your pieces is always a pleasure.

His book is filled with lists of alliterations. Some of them are fantastic, but they get a bit tiring after awhile.

I’m glad you enjoyed the piece!

I’m a sucker for historical writing that captures the flavor of the subject. I feel like I’ve been temporarily dropped into the late 19th century mindset.