My high school coach complained every time my teammates and I hit a fly ball. He had a temper, and would berate us in the dugout for stupidly hitting the ball in the air. He taught us a level swing that generated line drives or, almost as good, ground balls. There was probably nothing quite as beautiful to him as a player getting thrown out by 30 feet legging out a hard-hit ground ball.

Fly balls are too easy for the opposing team to defend. All the outfielder has to do is catch the ball. That’s just one step. Ground balls, by contrast, take three steps: The infielder has to field the bouncing ball, throw it accurately to first base, and the first baseman has to catch said throw. Way harder.

On my mediocre high school team, where my teammate once threw the ball over the backstop from shallow left field on a relay home, that reasoning held up. But by the time players reach the minor leagues, and even college programs, that reasoning starts to fall apart. In MLB, it makes no sense at all. The fielders are just too good. And yet, until recently, coaching has taught batters to hit line drives or ground balls.

Something of a fly ball revolution is taking place, however, as numerous observers have pointed out. J.D. Martinez is perhaps the poster boy of the fly ball movement as a former line drive/ground ball hitter who reworked his swing to hit more fly balls and saw his offensive production and paycheck increase. He was recently quoted saying:

“I always thought the perfect swing was a line drive [back at] the pitcher,” Martinez said. “I’d go out there and hit the ball perfectly, and it’s [a] single. Why is my perfect swing a single?

Why indeed? We know that fly balls turn into doubles and home runs, which as individual events are worth more than singles. The ground ball/fly ball numbers from 2016 back up the premise:

This made me wonder, which players on the Cubs have seen the fly ball light? And which ones need to get a little lift in their game?

For some context, the Statcast crew has developed a stat called “Barrels” defined as batted balls “whose comparable hit types (in terms of exit velocity and launch angle) have historically led to a minimum .500 batting average and 1.500 slugging percentage.” In other words, barring some weird outfield wall depth or gnarly wind, “Barreled” balls are likely to leave the yard. In general, Barrels leave the bat at a minimum of 98 mph and at a launch angle between 26-30 degrees (though the launch angle expands for balls hit above 98 mph). So, to do the most damage, batters want to hit the ball hard and somewhere in that 26-30 degree sweet spot.

So how do the Cubs players fare? Take a look at this chart comparing their average launch angle versus their average exit velocity from the 2016 season:

As you might expect, Kris Bryant and Anthony Rizzo hit the ball harder than most and, on average, closer to the ideal launch angle. Other fly ball standouts are Addison Russell, David Ross, and Javier Baez.

On the other end of the spectrum are Willson Contreras, Ben Zobrist, Albert Almora Jr., and Jason Heyward. All of these guys could benefit from trying to hit the ball in the air more, and, it’s not rocket science. Particularly intriguing is Zobrist, who hits the ball just as hard (avg. exit velocity: 89.8 mph) as Bryant (89.8 mph) and Rizzo (89.8 mph). If he hit more fly balls, could he hit 30 home runs this year? He hit 27 dingers back in 2009 when he was young and spry, and hit 18 or more three times, including last year, so perhaps a swing tweak could do the trick. In fairness, part of Zobrist’s unique offensive value is his ability to put the ball in play with two strikes, and altering his swing to generate more loft may sap that superpower. I doubt Zobrist will change things barring some kind of epic and protracted performance meltdown.

I also compared the spray charts for batted balls satisfying the 98+ mph exit velocity component of Barrels for Bryant, Heyward, Contreras, and Zobrist: 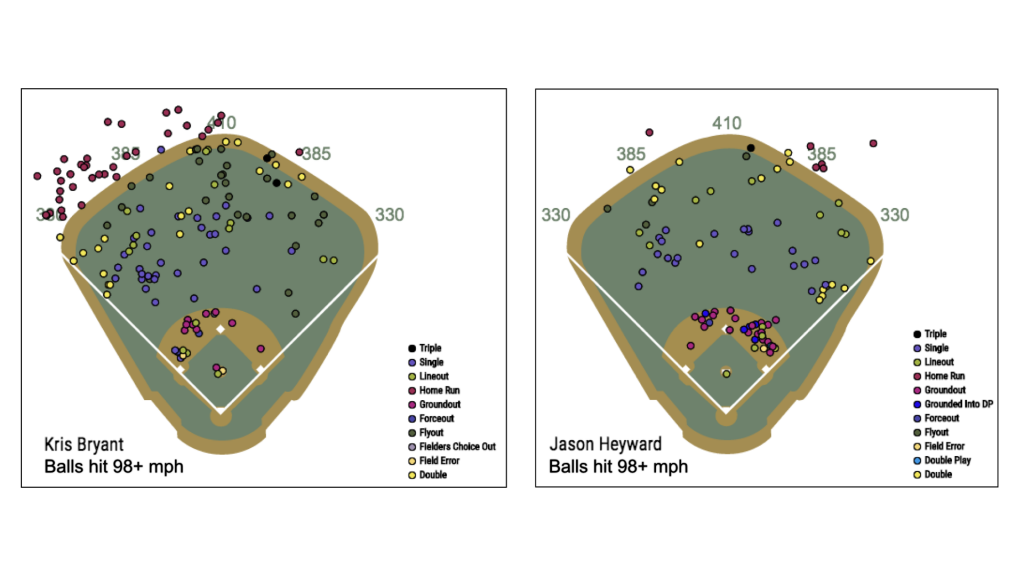 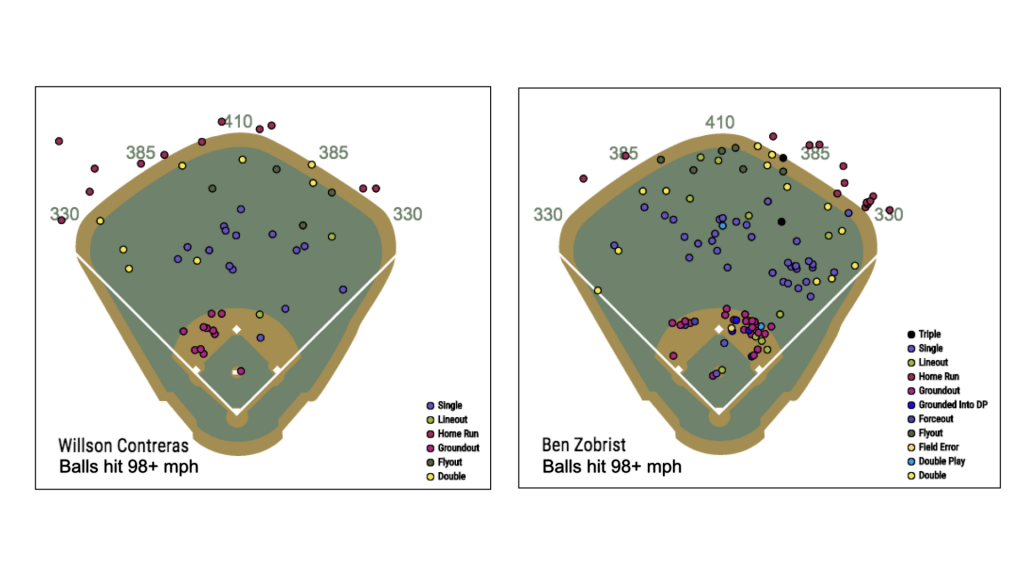 Yes, I know Bryant had a ground ball/fly ball ratio of .67 in 2016, which stands in stark contrast to the others (Heyward: 1.39, Contreras: 1.93, Zobrist: 1.57), but the dearth of hothothot pink ground balls in Bryant’s spray chart is shocking. In contrast, Heyward killed a lot of worms with grounders to the right side. Comparing the Cubs’ average launch angle on 98+ mph batted balls is also revealing:

Bryant, Rizzo, Ross, and Russell stand out here, perhaps unsurprisingly. Contreras and Zobrist are near the rear, with Heyward a distant, distant last. His average launch angle on batted balls hit at 98+ mph was a miserable four (4!) degrees.

And that brings me to the favorite offseason obsession for many Cub fans. After Heyward’s steaming turd of a 2016, what’s up with his new swing? We have poured over the grainy Zapruder film from offseason workouts, scrutinized every Spring Training plate appearance, and heard all the platitudes from Cubs coaches that they are not worried. And we all know that Spring Training stats don’t matter, right?

So what can we glean from Heyward’s Spring Training performance based on these more-reliable spring training indicators?

Compared to last season, Heyward is striking out more, walking about the same, and hitting a hell of a lot more balls in the air! That last statistic is promising, and it bears watching as spring training grinds on.

Tags: Fly ball Rate, Fly Ball Revolution |
Dan Hodgman
Follow @@daniel_hodgman
I live in Lincoln Park with my wife, who thinks I am crazy because I can sit and watch every pitch of the Cubs season without going insane, and my 160-lb mastiff, who just wants to sleep, eat, and poop. I write about baseball in the hopes of one day changing both of their perspectives.
read more from Dan Hodgman

1 comment on “Has the fly ball revolution hit the Windy City?”

I hope to God you trolled your old coach with that wRC+ comparison of ground balls and fly balls….lol