The frustration of fans on the North Side has found its way around the roster throughout this up-and-down 2017 campaign. Almost nobody has been safe from the blame game for a team lingering around .500, including many members of a bullpen that has been a strong element of a largely inconsistent club, ranking third in the National League in reliever ERA (3.35) and second in the NL in WHIP (1.20). Obviously some names have been free from such ire, including dominant closer Wade Davis, but one name working his way back free of the moans and groans of name association is that of reliever Justin Grimm.

Grimm is an interesting player to study and has been relatively enigmatic in certain respects during his time with the Cubs. He’s always had good stuff, but his usage over the past few seasons has fluctuated, and he’s had some issues with his control. The two are likely related in some form or fashion. To the latter point, he followed up a 4.7 BB/9 season in 2015 with a still-high 3.9 BB/9 mark last season. Grimm experienced many changes from 2015 to 2016 that didn’t paint a terribly pretty picture for him heading into this year. Here are those numbers from 2015 to 2016 illustrated, as well as his numbers to this point in 2017, which we will break down a bit further later on:

Focusing specifically on 2015 to 2016, there’s not a lot of promise there, obviously. His workload was relatively similar, but he experienced increases in figures that you’d prefer not to increase and decreases in others that you’d prefer not to decrease. It all culminated in that ERA that leapt up from 1.99 in 2015 to 4.10 last year. Nonetheless, some of the underlying and peripheral numbers allowed us to maintain hope for Grimm moving beyond 2016. And it was a dominant spring, which featured a 1.42 ERA and 0.63 FIP that set forth some relatively high expectations for him moving forward.

Additionally, here are some of the contact trends that were displayed against Grimm over the course of the last two seasons, as well as thus far in 2017:

Obviously the jump in hard contact against over the last three seasons is the most discouraging part of all of this, especially when combined with the decrease in his groundball rate. A decrease in fastball usage, as well as a slight dip in velocity, likely played the largest part. Grimm saw a rise in his curveball usage to up over half of the time, while his fastball usage, which one would expect would be used in order to play the curveball off of, suffered as a result: 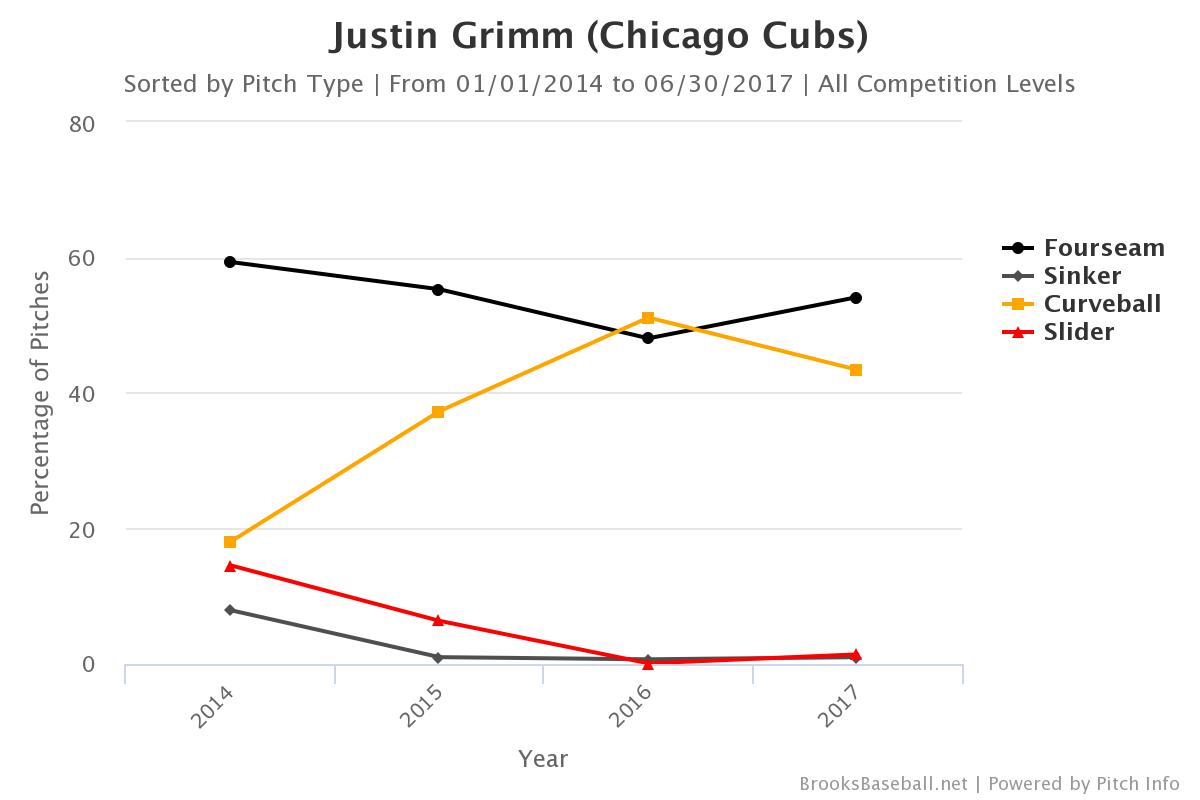 Perhaps the most interesting element of the usage is the fact that the last few seasons have seen Grimm narrow down his overall usage to essentially just those two pitches, depending on who you talk to. This season has returned to a season in which he’s throwing the fastball back at 54 percent of the time (and back at 95.1 MPH on average to boot), with the curve coming into play 43.4 percent of the time, an eight percent decrease from last season.

But of course, our focus is on the here and now, regardless of whatever expectations were set forth prior to 2017. And 2017 obviously did not get off to the type of start that Grimm, or the Cubs, were hoping for. That’s largely reflected in his overall numbers for the season, which don’t look terrific. A quick breakdown of his month-to-month performance, however, has us very excited about what Justin Grimm can provide out of the Chicago ‘pen moving forward.

That’s a lot of fun to look at, if for no other reason than it shows significant improvement for Grimm since his return from a stint in Iowa, hence the only six Major League innings to his credit during the month of May. As such, there’s no shortage of appealing things to point out. For one, the walks are way down. For a guy who has had some issues with free passes, even in success, this is a monumental development. And it’s one we can attribute to his increased aggressiveness. Brooks has him throwing a fastball over 56 percent of the time in June, and using that fastball aggressiveness in conjunction with the strong curve that he possesses appears to be keying his success.

Not only are the walks way down, but he’s getting hitters to put the ball on the ground more, which has fed into softer contact and an obscenely low batting average on balls that are put in play. Everything’s coming up Grimm thus far in June, in the absolutely best possible way.

There’s no way to overstate how crucial this development is for Grimm and for the Cubs. His demotion to Triple-A put his future in doubt, but not only is he potentially securing a spot in the Cubs’ relief corps moving forward, but he is also making up for some of the shortcomings of the bullpen in other areas (See: Rondon, Hector). When you have a guy who is being aggressive and using a high-90s fastball in unison with a nasty curve, that’s the type of guy you can throw in any leverage situation and expect success. And it’s likely what we’ll see Joe Maddon do now that Justin Grimm is showing what he really can be out of this bullpen.

Tags: Justin Grimm |
Randy Holt
Follow @RandallPnkFloyd
Randy Holt is a staff writer for BP Wrigleyville. He also demonstrates what little writing talent he has on the fantasy side of Fangraphs, with a focus on third base for Rotographs. A native of Chicago, Randy is a Phoenix-area resident and a high school teacher, educating juniors and seniors on the finer points of American and British literature.
read more from Randy Holt

I sensed he had improved from the eye test but….wow.