The Chicago of the mid-1800s that prided itself on its cleanliness and relatively high standard of living for its poor had disappeared by the turn of the century. Connecting the East, South, and West, Chicago rapidly bloomed due to the expansion of the railroad, its population growing from 360,000 in the 1880s to 1.7 million by 1900. The bulk of these migrants were Jewish, Irish, Italian, Asian American, and Black Americans escaping Jim Crow laws in the South and the effects of the 1890s depression across the Midwest. Though the city flourished economically compared to most places throughout the country, it was still recovering from the Great Fire and thus could not offer much relief for its new inhabitants.

White American residents moved further outside the city, leaving this new multicultural population to fend for itself in hastily built tenement housing. Seeing a great opportunity in this rapidly expanding population, businessmen backed by a corrupt city council launched a host of anti-poor campaigns, charging exorbitant prices for the shoddy housing and forcing the residents to pay extra for the privilege of bathing. Due to these factors, plus the dearth of green space, diseases rapidly spread throughout neighborhoods, increasing the homeless population as families at a time lost their jobs due to illness and death. The city again monetized these people’s suffering by imprisoning anyone caught stealing food or other basic necessities. For much of this time, Chicago was one of the worst cities in the country in which to be poor.1

These hardships doubled for the city’s small but growing Black population. Despite the passage of anti-discrimination laws in 1885 and the expansion thereof in 1903, Black Chicagoans, totaling at this time roughly two percent of the city’s population, were barred from many places in the city, including almost the entirety of the Loop. While the white inner-city workers got jobs in steel mills, stockyards, and slaughterhouses, Black workers were largely confined to being porters, waiters, elevator operators, and other jobs the white populous deemed below themselves. As the decade progressed and an increasing number of Black families moved to the city, the economic divide deepened, providing the rich and poor white sects of the city a common target.

The Expansion of Baseball

Spurred by massive drops in attendance due to almost a decade of losing seasons, new Cubs 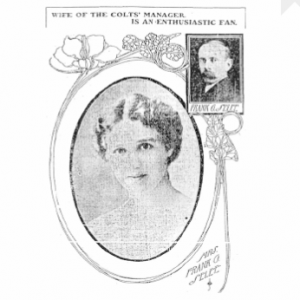 owner Frank Selee, assisted by his wife, May Selee, and soon-to-be AL commissioner, Ban Johnson, implemented several changes in order to revive Chicago’s once-thriving baseball community. He significantly dropped the cost of tickets, added several more Sunday afternoon games, and backed the creation of local semi-pro teams. May Selee served as the public liaison, writing columns for the Chicago Tribune in the Cubs’ day-to-day business, providing fans from all economic backgrounds with a personal connection to the team.

In conjunction with these reforms, white young adults and children formed a number of semi-pro teams by the turn of the century, while the Black population created its own semi-pro and barnstorming teams, building on several decades of being banned from white teams. The civic project of baseball became introducing the city’s new population to the customs of the urban environment, teaching each participant his or her place in the city.²

Prior to the influx of migrants, it was common for “white-collar” Chicago businesses to form leagues for their employees, granting them time off to both play in and attend games. Doing so supposedly would increase employee morale, reliability, cooperation, and health, plus make workers more loyal to their bosses. The practice ended sometime during the 1880s, as the influx of workers necessitated employee loyalty for fear of losing their jobs. Nonetheless, baseball during this period remained an activity enjoyed solely by the well-off, while the working-class skewed toward indoor events, like boxing, until Selee’s initiatives took hold.³

Once the city rescinded its ban on Sunday baseball in 1893 and expanded access to Sunday games under Selee, attendance for the Cubs increased annually until 1906, drawing in an average of 5,600 fans per game, the second-highest in the league, behind only the Giants. As the vast majority of the population, including women and children over the age of 10, worked at least 5.5 days per week, Sunday became the only day most of them could spend at the ballpark, and spend it at the ballpark they did.

In addition to watching professional games, by 1905, various churches and small businesses backed new local amateur and semi-pro teams, with larger white-run corporations funding white teams as baseball again became more acceptable a sport to play. The working-class who were unable to join these many teams turned to indoor versions of softball to fill this hole, quickly popularizing the sport that was cheaper and easier to access than baseball, but just enough like baseball to satisfy its players.

The notion of baseball as America’s Game also gained more purchase at this point, thanks to A.G. Spalding’s baseball origins committee, prompting league and team owners to tighten restrictions on Black teams. No longer was it possible for Black and white teams to play friendly matches together or for Black players to join white teams. Each contest became an opportunity to assert white superiority. More money was thrown into developing teams and players that could provide both the Cubs and White Sox with all-star players.

Further, the majority of the small neighborhood parks in which Chicago youth of the late 1800s played the game had been converted to tenement housing. The urban population thus had to travel miles to the suburbs of Chicago to find a playing field, which was untenable for many. Moreover, Black teams had to rent fields from their white owners, who routinely increased the cost in an effort to stifle their Black competition.

Nonetheless, Black baseball in Chicago thrived. Not only did the city boast the Urbans, one of the premier teams in the country, but the Michigan Page Fence Giants relocated to the city and became the Columbia Giants. At this time, Chicago rivaled Philadelphia in terms of premier Black baseball teams. Though the poorest Black people were still cut off from participating in and supporting these premier teams, smaller, recreational teams grew around them, being organized on every small bit of grass or quiet street in the city’s center.4

Though the highest levels of baseball in this time were accessible only to the well-off, and no number of teams could pull their players out of destitution, baseball still found a way to enter all economic and racial milieus. By the time the Negro Leagues were created in 1920, baseball for both white and Black populations in Chicago was a source of racial pride and a means of fostering community.