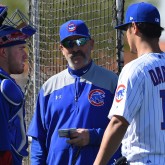 Shortly after the Cubs signed Yu Darvish, Chris Gimenez, their newly-acquired backup catcher who had worked with Darvish as a Ranger in 2014, offered his thoughts on what might have gone wrong in Darvish’s two disastrous World Series outings against the Astros. By now, we’ve all heard the pitch-tipping theory. Gimenez, however, turned his attention […] 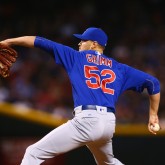 When a club is as successful as the Cubs have been since the season got underway, its flaws are sure to stand out just a bit more than they normally would. Still, flaws are hard to find. Not only has the Cubs’ hitting and starting pitching been incredibly good, the bullpen has been absolutely dominant as well. Through […]