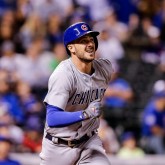 We’ve all heard it repeatedly over the past couple weeks. The Cubs offense is struggling. They have multiple guys hitting well below their expected numbers, most notably Kyle Schwarber and Anthony Rizzo. But how bad is it? How far off are these guys based on their projections? It’s an interesting way to look at things. Projection […] 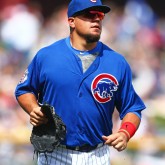 Last week, the PECOTA projections were released and while few would have expected another hundred-win season projected for the Cubs, the 91 wins they’re currently sitting at on the BP projected standings page is underwhelming to say the least. To make it appear even more like PECOTA has something specifically against the Cubs, the Dodgers […] 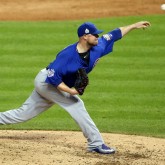 “You try to balance different factors. You wake up one day like ‘We’ve got to sign Lester,’ you wake up another day, ‘We’re never signing a pitcher in his thirties,’ and it’s an internal struggle. Jed and I had the back-and-forth with each other. We changed each other’s minds. It’s the process of getting the […] 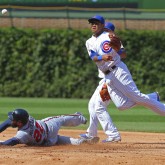 Addison Russell had a profoundly weird rookie season. You can tell it was weird, because Russell (a right-hitting, slick-fielding middle infielder who hit for surprising power but struck out a ton) got Christian Yelich (a left-hitting corner outfielder whose standout skill is his pure hit tool) as his fifth-closest PECOTA comp for 2016. Freddie Freeman […] 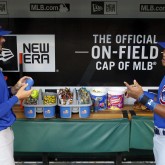 There are lots of exciting things about the Chicago Cubs this season, and in my opinion the most exciting among them is this: Despite their sizable and ever-increasing odds of making the playoffs (86.3 percent, as of this writing), fans have every reason to believe that the 2015 major-league baseball season will be the Cubs’ worst  in […]