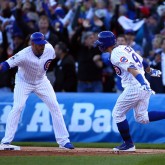 The Cubs, it appears, are done with their major offseason moves. That’s not a bad thing—lord knows they’ve done enough already—but it does mean that the present period, running roughly between the end of Cubs Convention and the beginning of Spring Training, lacks a certain something when it comes to news. Namely, news. But that doesn’t mean that […]