The prospect of some positional comfort going into his mid-30s, after years of being moved all over the diamond, helped lure Ben Zobrist to the Cubs this past offseason. He had been promised the starting second base job and a reunion with his old skipper, a situation in which he was poised to succeed, but now, four months into a 2016 season with the Cubs pacing the majors, Zobrist finds himself in the outfield nearly every day.

Javier Baez, meanwhile, boasts an impressive .285 TAv this season, with an attendant .278/.317/.451 batting line, and he’s successfully burned into the minds of Cubs fans and opponents alike his stellar defensive play across the field (not unlike the supplanted Zobrist early in his career). Hints of his “unicorn” prospect status of bygone years have shown up in his plate appearances between those defensive highlights, with his strikeout rate coming back into “just really high” territory instead of historically worrisome territory, and with power cusping and contact rate inching upward. Baez has adjusted to major-league pitching in his first full season, after two abbreviated stints in the majors, and played himself into Joe Maddon’s lineup nearly every day.

Much has been made of Baez’s decrease in strikeouts this season, and rightfully so: it’s been key to his moderate success. He sits at a 24.8 percent strikeout rate at this writing, a far cry from the 41.5 and 30 percent marks from his 2014 and 2015, respectively. Toward the beginning of Baez’s hot streak, Cat Garcia analyzed the precocious utility player’s improvements theretofore, and wrote at length about his suppression of the strikeout. Her conclusion—that Baez was slicing a percentage off his whiff rate by fouling off more pitches—is sound, and due for an update now that we’ve seen a month and a half of solid hitting from Baez. So, how is the sausage made? A comparison of his 2014-2015 seasons with his 2016 reveals a significantly different hitter.

Baez remains capable of fouling pitches he can’t drive, and therefore missing fewer pitches at which he swings. He’s maintained those whiff rates, against some pitches as much as a ten percent decrease compared to his 2014-2015 seasons, and his rate of balls in play on those pitches has crept upward. And, as Garcia noted, the slugger is making more contact on pitches out of the zone by a significant margin, and a peek at his zone profiles reveal that he’s missing significantly fewer pitches at which he’s swung in all locations. 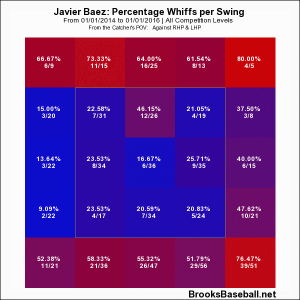 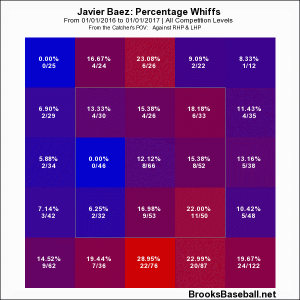 Most notable is his wholesale change on pitches above the strike zone. The book on Baez used to include “blow him away with a high fastball, his enormous swing can’t catch up,” but it appears as though the page with that play has been crumpled up, tossed into the wastebasket, and summarily set on fire. For the most part, Baez is swinging at just as many letter-high fastballs as he has in the past, but he’s making much better contact, indicating a shortening of his looping swing, borne out by the eye test. A similar mutation is happening with regard to pitches below the zone, where Baez (and most hitters) remain the most vulnerable, although to a lesser extent.

While it’s the most obvious difference between this season and his struggle-ridden partial seasons, Baez hasn’t only improved his strikeout rate. He’s also driving pitches at which he was previously flailing. Take a look at a table of his outcomes on specific pitches, from the same periods as the above charts. 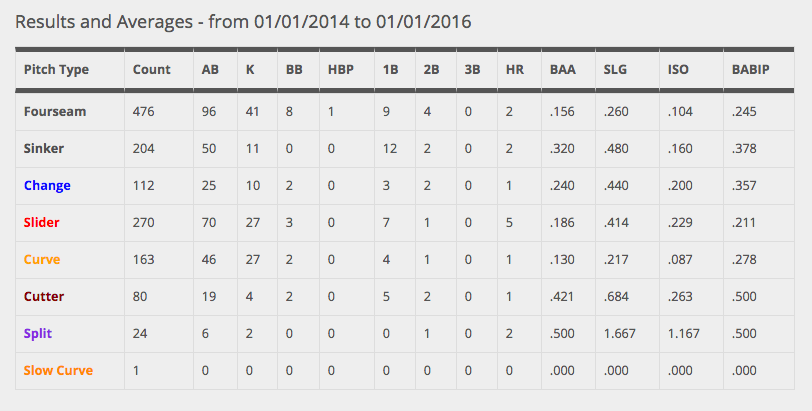 Whereas a plurality of Baez’s home runs in 2014 and 2015 came against sliders—mistake pitches in the zone, sliders of the cement mixer type that hang for days and tantalize a hitter with a mighty stroke such as Baez—his 11 home runs this season have been evenly distributed among pitch types. His .460 slugging percentage versus fourseam fastballs stands out, as he previously struggled to a .260 slugging mark. For evidence, gaze upon his moonshot off of Jameson Taillon on Father’s Day, turning on a 96-mph fastball on the inside corner, the product of an incredibly strong, yet compact swing. 2015 Javy misses that pitch, or tops it to the left side of the infield; 2016 Baez flexes his short swing and parks the pitch in the bleachers.

Baez’s batting average and slugging versus other pitches have improved as well, even against the sliders that he was already mashing. Without his power, Baez is merely a damn good defensive infielder. With his power, he’s the 30-home run hitting, slick fielding, baseball smart cog in the Cubs machine of which many have dreamed for years.

I would be remiss to not mention the infielder’s ability to kill left-handed pitching. He can still do this when a lefty hangs a breaking ball, and his 2016 line versus lefties is a pretty .349/.419/.554, with an 8.6 percent walk rate, compared to a dismal 1.5 percent rate versus righties. His career slash versus lefties now rests at .291/.359/.497, and even if Baez reverts to his poor strikeout rates of past seasons, he will likely smash southpaws for the foreseeable future. Unfortunately, that walk rate and his overall performance versus righties might portend some struggles as Baez gobbles up more playing time. Starting at second most days means facing many right-handed starters, fuel for an argument for more selective deployment of the 23-year-old. Strikeouts versus fastballs and breaking pitches have also been on the rise for Baez in nearly every month of the 2016 season (his strikeout rate versus offspeed pitches have trended inversely). Most of this is conjecture, however, and daily observation of Baez’s plate appearances against righties for the remainder of the season will still be the most helpful indicator of future success or failure.

Baez isn’t done, of course. The next two months will likely be his longest stretch of consistent playing time at the major league level in his short career, and so the opportunity to both improve and to prove himself a capable major-league hitter is ripe. To put it another way, if Baez were a Pokémon (folks, I am all about the zeitgeist), he would be completing his first evolution, but still quite a few levels away from becoming his proverbial, feared “final form”—a two-to-three-win Charmeleon on his was to becoming a five-win Charizard. He’s still capable of the occasional herculean hack, and not all signs point to continued success with the approach upon which he’s landed, but he’s made hay in June and July by making more contact across the board and hitting the sweet spot on pitches in his wheelhouse. The saga of the 2016 Cubs will come to its epic conclusion in a few months, but that of Javier Baez is just getting into its exciting middle stages.

I might be missing something, but it appears that in your first comparison of pitch outcomes between 14,15 to 16, it seems as you have the 2016 data twice.

Later in your article, when you again use the pitch outcomes chart, you have both time periods shown correctly.

Your analysis is much deeper than mine.
For June Javy’s BA was .292 and his OPS was .899.
For July he had a BA of .325 and an OPS of .846.
There was stretch toward the end of July when he went 9 for 25 and four of those hits going to right field. Then Joe put him in the cleanup spot and he’s fallen apart, trying to pull everything. In the last 6 games he’s had 13 Ks in 28 plate appearances for a strikeout rate of 46.4%. I root for all the Cubs but I especially want to see Baez succeed. Hopefully, his old habits will soon disappear again.