Two years ago, I wrote my second feature ever at BP Wrigleyville about Justin Grimm’s newfound success after he ditched his slider for a curveball. His 2015 and 2016 seasons were improvements on a breakout 2014, as he struck out around 30 percent of hitters while allowing few home runs. After two seasons of making exactly one appearance in Triple-A Iowa per year, however, Grimm has found himself on the shuttle to Des Moines a couple of times this season, and he’s been the last man in the bullpen most of the year. Joe Maddon has clearly eschewed Grimm in favor of his other bullpen weapons, especially Carl Edwards, Koji Uehara, and Brian Duensing. Why has Grimm become Maddon’s least favorite ‘pen arm, and what’s causing Grimm’s struggles this year?

For once, I think the answer is rather simple. Whereas Grimm’s success in the three true outcomes drove great seasons the past three years, this year he’s striking out fewer hitters, walking more, and giving up a lot more home runs. His strikeout and walk percentages are each the second-worst since the Cubs turned him into a full-time reliever—26.3 percent and 12.5 percent, respectively—and his home run-to-flyball rate is an unsightly 23.7 percent. Fielding independent pitching numbers (which, unlike in most other cases, tell Grimm’s story fairly well) loved Grimm the past few years, but find him a merely average arm this season. All considered, Grimm’s ugly 5.40 ERA and precisely average 4.71 DRA represent a swift decline from Grimm’s tenure as bullpen fireman.

About that home run rate: Grimm is allowing more fly balls this year than in any year past, so it’s even more exaggerated than it would be with just the juiced ball and arcade home run environment. At 39.2 percent, his flyball rate is five points higher than his career average, and about five points higher than league average this year. He’s also inducing fewer grounders than at any point in his career, for a nearly one-to-one groundball-to-flyball ratio. In short, that’s not the path to success for most pitchers, and especially not for a curveball-reliant reliever like Grimm.

The home run surge that many players are riding has taken a toll on a number of Cubs pitchers, not the least of whom is Grimm. But Joe Maddon has also begun to use Grimm in lower-leverage situations, as the back of the bullpen filled up with experienced (Uehara, Wade Davis) and high-upside (Carl Edwards, Jr.) arms, and as Grimm lost his sharpness. The average leverage index of situations in which Grimm has entered the game is the lowest since he became a full-time reliever, and the overall leverage index of situations in which Grimm has pitched is much lower than each of the past three seasons. Clearly, the home run-happy Grimm has lost the favor he had curried with Maddon.

But what has made Grimm give up the homers? Is it his pitch selection? His stuff? Is he just looking at hitters kinda funny? Well, his pitch selection isn’t the culprit. Since his turn to the curve in 2015, Grimm’s selection has been rather staid: only fastball-curveball, about a 60/40 split. From last year to this year, Grimm has thrown a significantly higher number of fastballs to lefties in all counts, but his selection versus righties hasn’t varied much. There isn’t a wide gap in his splits this year, so we can safely rule that out as the cause of his woes.

As for stuff, Grimm is actually throwing harder on average in 2017 than he did last year. The movement on his fastball and curveball are mostly the same, with his curveball perhaps flattening a bit as this year has progressed. His release points don’t reveal any drastic changes, either. What has changed is his pitch location, which has drifted toward the center of the plate. 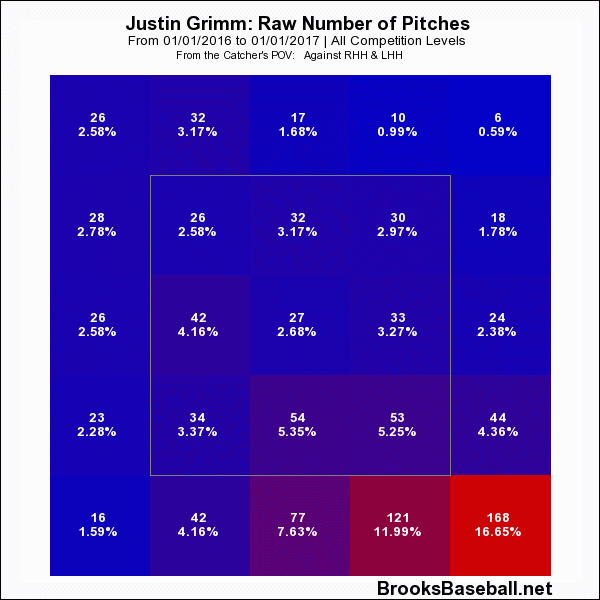 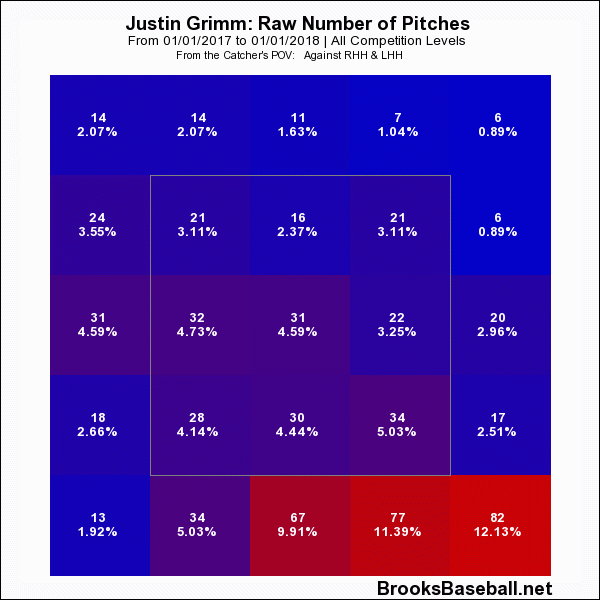 One can see Grimm’s game plan clearly: away to righties. While he’s generally done a fine job of keeping the ball down, it seems as though many pitches have snuck back toward the center of the plate, and hitters have feasted on those pitches. 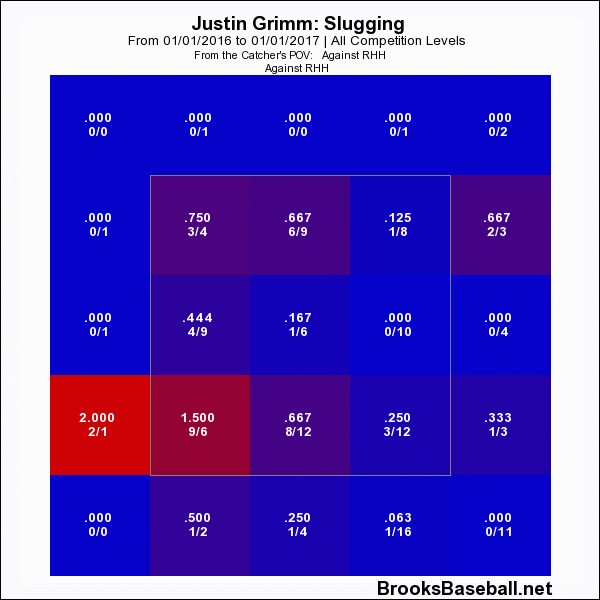 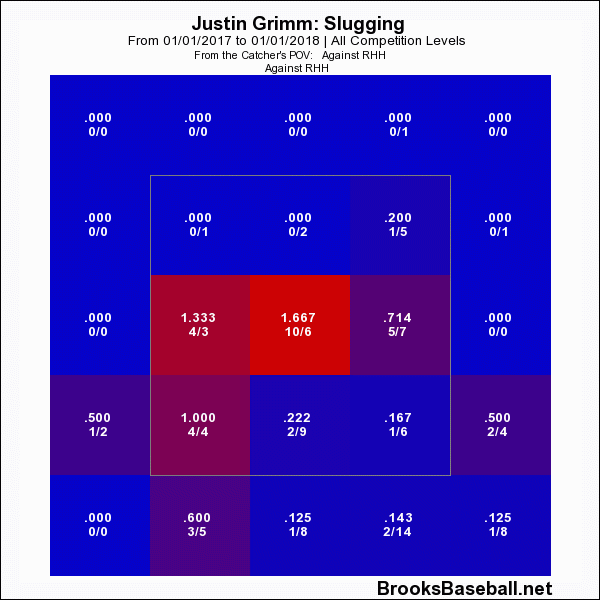 There it is, the ugly scourge on Grimm’s record. It’s not the most elegant of solutions—don’t leave the ball over the plate or you’ll get tattooed, especially with the ball rocketing off the bat like it has this year—but it’s the simplest and truest one. Grimm needs to find the outer edge of the plate again, or he risks being designated for assignment. If the Cubs acquire a reliever before next week’s trade deadline, that risk is compounded. Grimm served the Cubs admirably for three years as a bullpen cog, but the writing might be on the wall… or at least in his zone profile.