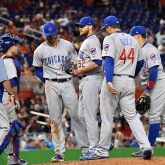 Two years ago, I wrote my second feature ever at BP Wrigleyville about Justin Grimm’s newfound success after he ditched his slider for a curveball. His 2015 and 2016 seasons were improvements on a breakout 2014, as he struck out around 30 percent of hitters while allowing few home runs. After two seasons of making […]