What You Need To Know: This game was shaping up to be yet another frustrating affair, as Carlos Martinez dominated the Cubs and Tommy Pham hit a solo home run in the first to give them the lead through the first 3.5 innings. Then, Lackey and Contreras got ejected in the 5th after allowing the Cardinals to make it 2-1. Luckily, the Cubs’ bats came alive in the 6th, in which they scored seven runs to make it 8-2.

Next Level: During the offseason, Kris Bryant stated that his goal for the season was improving his opposite field power, a hallmark of his minor league career that had undergone a dearth the past two seasons. Here at BP Wrigleyville, we have had much to say about Bryant’s progress in this element of his game, largely believing him to have made progress in this area.

This afternoon, Bryant put this reinvigorated skill to use, hitting a towering opposite field home run off Carlos Martinez to tie the game in the bottom of the 4th. Though it was just the fourth opposite field home run he’s hit this year (matching his total over the previous two seasons), it was the result of a concerted effort to put balls on the outer half of the plate into play.

Particularly in the second half the the season, Bryant has laid off inside pitches, which he has typically feasted on, in favor of outside ones. Corresponding with this approach is an increased flyball rate and ISO on the outer half of the plate. Thus, over the past six weeks, despite boasting a lower home run rate, Bryant is hitting more doubles and overall for more power. 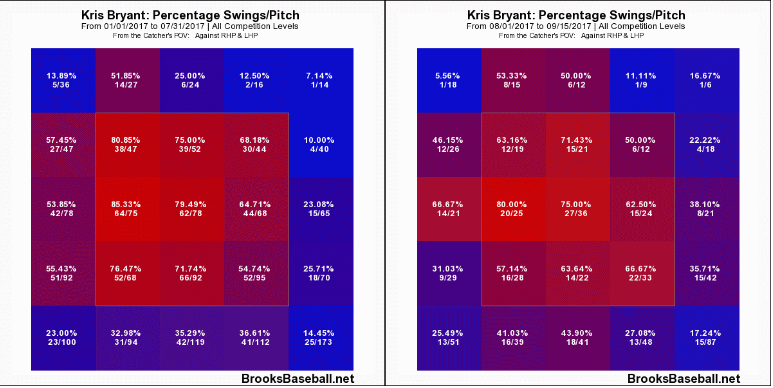 If he continues this trend, the opposite field home runs will come either later this season or next season.

The other big element of today’s game that remains a must-see regardless of the number of times it has occurred before, is John Lackey’s ejection in the 5th inning. After home plate umpire Jordan Baker called the third strike in a Carlos Martinez at-bat a ball, Martinez subsequently hit an RBI single, prompting Lackey to do this:

Now, the Lackey ejection is not particularly rare, but this one is remarkable in that Lackey was actually in the right. Yes, he should have exerted much more self-control, but at this point asking that from him is much like asking the Earth to stop rotating. The call that precipitated the ejection will likely be one of the worst ball/strike calls of the season, and in that sense, Lackey’s gripe was perfectly legitimate, but as usual, he went a bit overboard, and when an incensed Lackey comes charging at you, ejection is the knee-jerk response. However, subsequently ejecting Contreras for merely muttering to himself (regardless of what was said) was seemingly uncalled for and a desperate move by Baker to re-assert his control over the game. Baseball is the perfect mix of control, intuition, and emotion, but at certain times, the three combine for a truly unfortunate incident, as was the case here.

Luckily the battery ejection did not hurt the team in this game (though the bullpen may suffer for it in later games), as the offense kicked in the next inning and the bullpen (Wilson, Edwards Jr., Strop, Grimm, and Davis) held the fort.

Bottom Play (WPA): For the first half of the game, the story belonged to Carlos Martinez, who no-hit the Cubs through the first three innings.  But this spot belongs to his RBI single in the bottom of the 5th. Not only did it give the Cards a lead, it ensured the ejection of both Lackey and Contreras, becoming truly the most valuable play of the game for the Cardinals. (-.151)