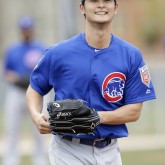 It’s crazy how one move can change the perspective of an entire offseason, yet here we are. If you were to write the Cubs’ needs on paper and listed them when the offseason began, how many holes needed to be addressed? They needed a frontline starter, rotation depth, bullpen help, a closer, a lead-off man […] 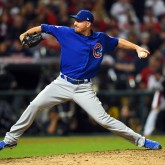 Mike Montgomery made his first career start in the majors on June 2, 2015 against the New York Yankees. His box score from the night is innocuous—six innings, 24 batters, four hits, a run, a walk, and four strikeouts. That he would be, just sixteen months later, pitching the final out of Game Seven of the […] 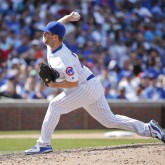 I was going to use this space to simply lay out a detailed explanation of what’s been off about Adam Warren lately. I had numbers and everything. And then the Cubs announced that he was being sent to Triple-A to stretch out and get ready for a spot start coming up, and suddenly it seemed […] 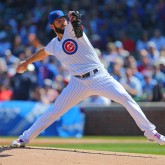 The Chicago Cubs’ starting pitching has been phenomenal over the first two weeks of the 2016 season. There’s really nothing but good news. Entering Monday, no team had matched the Cubs’ 11 Quality Starts, and only the Nationals rotation had a higher average Game Score. By a narrow margin, the club led the league in […] 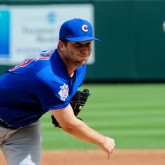 Now that we’re four games into spring training, it’s time for the worst and least-fruitful discussions to begin: the early looks at “position battles.” The Cubs’ main position battle is for the final two starter spots, which features incumbents Kyle Hendricks and Jason Hammel—who have the inside edge, to be honest—along with new Cub Adam Warren, […] 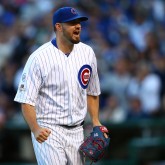 In June of 2012, the struggling Colorado Rockies tried something new: a four-man rotation. This experiment was exciting and interesting at the time, but it is now largely forgotten outside of Colorado and the small circle of baseball aficionados who care about things like rotation optimization. The Rockies planned to pitch their starters every four games and […] 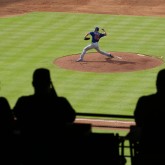 One of my favorite baseball books is George Plimpton’s 1961 classic, Out of My League. Plimpton, the founding executive editor of the Paris Review—and an enormous baseball fan—took it upon himself to pitch batting practice to the 1958 National League All-Stars a few hours before they took on the Junior Circuit at Yankee Stadium that year. Plimpton […] 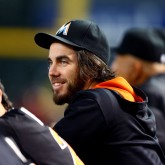 Every season, a lot of rumors and countless hours of speculation ensue during the weeks preceding the trade deadline. With the Cubs closer to contention than they’ve been in quite some time, and the need to add another starter growing more evident by the day, this year’s deadline was particularly nerve wracking for Cubs fans. Everything from rumors […] 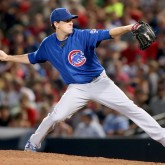 Would it surprise you to learn that Chicago Cubs starters have been among the best in baseball in 2015? If so, it shouldn’t. Their 3.38 staff ERA ranks fifth in the game. Their 3.22 FIP is second, as is their strikeout rate. They have walked fewer batters, as a percentage of the total they have […]