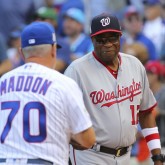 The Cubs have an opportunity to wrap up this instantly classic series on Tuesday evening after snatching a victory from the clutches of Max Scherzer on Monday. The Cubs need only win one of the next two games, and they have their first crack at a clinch at Wrigley Field with Jake Arrieta on the […] 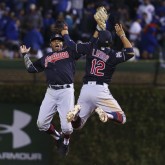 This piece, written by Baseball Prospectus’s Aaron Gleeman, forms part of the main site’s comprehensive coverage of the postseason, “Playoff Prospectus”. Game 4 was anything but a managerial chess match at Wrigley Field, as Cleveland jumped out to an early lead and broke things open for good in the seventh inning on the way to […] 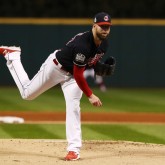 This piece, written by Baseball Prospectus’s Scooter Hotz, forms part of the main site’s comprehensive coverage of the postseason, “Playoff Prospectus”. Despite all the pregame talk of 30-40 mph wind blowing out at Wrigley for Game 3, runs were in short supply Friday night on the north side of Chicago. The only run of the […] 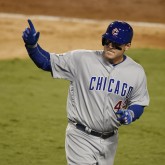 This piece, written by BP Wrigleyville’s Isaac Bennett, forms part of our in-house coverage of the Cubs in the playoffs, “Second City October.” Additional Game Four coverage can be found here. The Cubs entered tonight’s Game 4 of the National League Championship Series in a familiar position. Last year against the Cardinals, they needed to […] 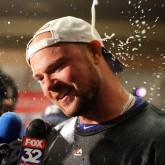 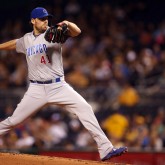 Human perception is a funny thing. Most Cubs fans would have been very happy being up 2-1 in the series after facing postseason legend Madison Bumgarner. Today Cubs fans find themselves in that exact position, but lack of sleep is not the only reason why Cubs fans are not happy with this turn of events. […]